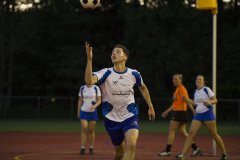 Last Sunday, September 15th, Vakgericht 1 played its first field game of the new season. An away game was scheduled to Rigtersbleek in Enschede. For most people in the team, this is closer than a home game at the University of Twente.

The game started well for Vakgericht. After a shot from Aswin and a doorloopbal from Mariëlle, it was 0-2 in our favor. Unfortunately, due to a strafworp for Rigtersbleek, it quickly became 1-2. Fortunately Joost then scored the 1-3 and our lead was again extended to 2 goals difference.

We then increased our lead to 3 goals by a score by Mariëlle, this time a long distance shot. Unfortunately Rigtersbleek managed to find the basket twice before half time and we didn't. The result with which we entered the break was 3-4.

After a short but good discussion in the break, we wanted to expand our lead again. Unfortunately this did not go as planned. Rigtersbleek scored the 4-4. Aswin then brought us back on the lead with a long distance shot. Vakgericht then lost the track. Rigtersbleek scored 5-5, 6-5, 7-5 and 8-5 in a row. However, we did not give up! We made the 8-6 through Aswin's shot. Hanna then scored another long shot in the last minute, making the final score 8-7.

Tomorrow (Sunday, September 22nd), the second field game of this season is planned. We play against EKC Nääs 3 at 11:45.